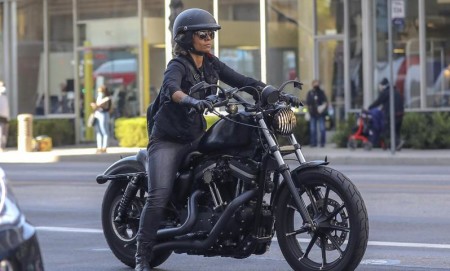 Halle Berry has been busy

At work on the upcoming film, “Moonfall,” a new sci-fi movie where Berry will play the lead female who is a NASA astronaut-turned-administrator, according to Screen Daily. The film will be directed by Roland Emmerich, according to the publication. Although she is in work mode, it doesn’t mean the 54-year-old doesn’t make time for some fun.

Earlier this week, the “Catwoman” actress was seen showing off her tough side. Berry was photographed in Beverly Hills, California on Tuesday going for a joyride on her Harley Davidson motorcycle.

Berry was dressed for the occasion like a true biker wearing a black shirt paired with light grey jeans, a bike helmet, and leather biker gloves. She completed her look with a pair of sunglasses and a small backpack on her back. Berry looked like a true pro and seasoned biker on her Harley.