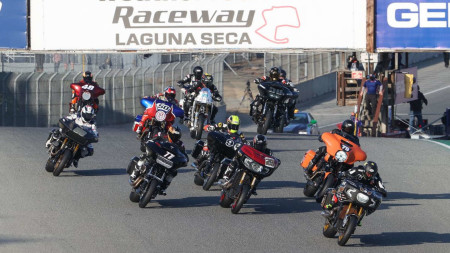 Betting Big On Baggers Proves MotoAmerica Is Serious About Having Fun

I have never in my life been so amped for a brand new class of motorcycle racing. MotoAmerica’s Drag Specialties King of the Baggers inaugural race at Laguna Seca looked awesome from the word go, and thankfully the on-track product lived up to every bit of the pregame hype. There is something so appealing about watching a dozen big beef boys with giant thumpy V-twins hauling ass around a legendary racetrack. America, Fuck Yeah, indeed.

(Full Disclosure: Harley-Davidson saw how excited I was about King of the Baggers concept and asked if I’d like to attend the race. The Motor Company shipped me a nice bright orange Street Glide with the upgraded 131ci Screamin’ Eagle motor. Harley organized my media passes and a campsite at the track for me. I paid for my own food and fuel and brought my own tent and sleeping pad for accomodations. A full review of the motorcycle is coming soon.)

Back in 2014 motorcycle legend Wayne Rainey met with a few of the higher-ups at the Petersen Automotive Museum in Los Angeles to discuss the state of motorcycle racing in the U.S. market. The American Motorcyclist Association
was previously owned by the Daytona Motorsports Group, or put more succinctly, the France family, which had driven the series into the ground with no TV package, half the rounds it had enjoyed the previous decade and very little fanfare. MotoAmerica was formed, and a plan to save AMA Superbike was developed.

The road has been long, but the series has seen a resurgence in recent years. After a short stint on Al Jazeera’s sports network beIN Sports, MotoAmerica found itself in a position to instantly double its audience by inking a TV deal with the triad of NBC Sports Network, Fox Sports and MAV TV. And according to Jeff Nasi, senior vice president of marketing for the series, not only did 2019 see viewership double, but 2020 tune-ins have tripled over last year. The series is delivering a superior product with more tracks, more teams and more riders than just a few years ago, and it’s trying new things.

One of those new things is this insane series for big American V-twins, and I just had to see it in person. MotoAmerica was planning to go all-in on 2020 as a year to introduce tons of new fan experiences at the track. In speaking with Wayne Rainey at the track on Sunday, he let me in on a little secret that the series was planning to run several classes of motorcycle hillclimbs up the face of the hill in the middle of the Laguna Seca track. Obviously coronavirus scrubbed all of those ambitious plans, but the series still got one great new thing kicked off in the middle of all of this. Which brings us back to King of the Baggers.

The race was a hit. Not only with the limited fans at the track, but the rest of the sportbike paddock, too. It brought a whole new demographic of rider into the MotoAmerica fold, showing that a big fat 2.15-liter V-twin can put on a hell of a show. This wasn’t quite the same as the Nicky Hayden, Casey Stoner and Valentino Rossi battles that Laguna Seca has seen in the past, but it’s not 2008 anymore, and this was something new — and it was totally rad.

I mean, just watch the race for yourself, it’s so freakin’ cool.

With a full grid of big-time builds from shops like S&S Performance, Vance & Hines, Arlen Ness Motorcycles and Roland Sands Designs, this was obviously going to be one for the history books. Add in pro motorcycle riders who will sit astride anything with two wheels and make it fast as hell, the likes of Tyler O’Hara, Ben Bostrom, Hayden Gillim and Frankie Garcia, and it’s bound to be a good time.

I watched the whole race from the base of the Corkscrew turns, which looked like this.

And Friday practice looked like this from the media pavilion on the outside of turn one.

It was pretty clear that Tyler O’Hara had total control of the field all weekend, as his S&S Performance Indian Challenger was about four seconds per lap quicker than the Vance & Hines Harley Street Glide of Gillim.

Gillim found speed throughout the weekend, however, and during the race closed that one-lap speed to about two seconds per lap. O’Hara’s little screw up at turn two on the third lap lost him about 20 seconds and punched him back to third in the race, but he still had enough legs to motor back into the lead on the penultimate lap. Conveniently, he made the pass right at the Corkscrew, so I got to watch it unfold. It was rad.

The King of the Baggers race was everything that racing endeavors to be. It was loud and brash and boisterous. It was fun and exciting and new. Most of all, it was fast. The best baggers were trapping at 127 under the bridge on the main straight, and turning laps in the mid-1:30s. Sure, that’s not even close to what the top Superbikes racers were running, but hey IndyCars are faster than NASCAR stockers, so maybe speed isn’t always the main metric.

After watching this race, I’m convinced the people at MotoAmerica are doing a great job of saving motorcycle racing in the United States. They’re doing exactly what a series needs to be doing in 2020; something fresh and new, something bold and interesting, and something that can get a shitload of shares on social media.

The bikes were extraordinarily prepared things, with many of them converted to a more traditional road racer setup, as you can see in some of these photos. Gone are the big floorboards, replaced by mid-controls with foot pegs. Gone are the big handlebars, in favor of flatter, racier bars. Nobody was really interested in letting loose their full specs, but the word on the street is that the winning Indian lost over 300 pounds in the race-ifying process to get down to Laguna Seca weight. Obviously the bikes are a little taller and set up to turn more easily, but when fully assembled and roaring down the front straight, they look passably like their street counterparts.

Well done to MotoAmerica, and well done to Tyler O’Hara for taking the first of what I assume will be many King of the Baggers wins. And for extra flare, here’s Tyler popping a wheelie down the corkscrew like an absolute boss.

Jalopnik contributor with a love for everything sketchy and eclectic.