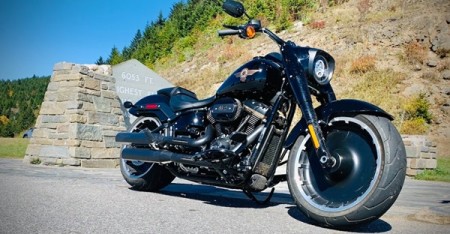 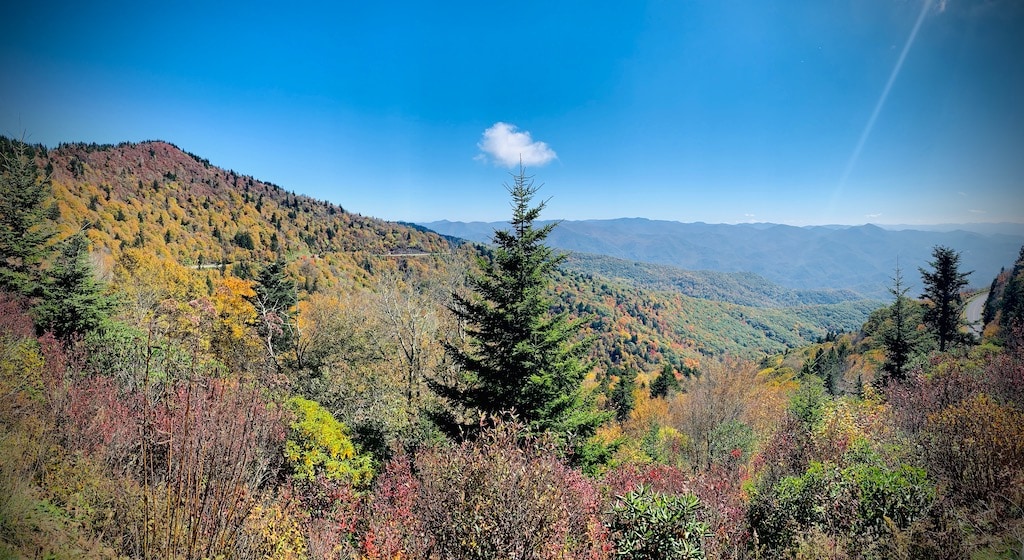 Dancing with the ride, the road, and the land of the Smoky Mountain High Country in Autumn

If you want a land to get into your soul, ask it to dance.  Roam through its curves, flirt with its scenery, stop and stare at its unfolding landscape and it will talk to you, revealing itself like an intimate dance partner.  Ask the landscape questions and it will whisper the answers in your ear, embedding it into your memory forever.  As a northwest native, I never thought I could feel that way about Fall in the Appalachians.

Autumn in the Appalachians grows on you like a lazy Southern accent.  Heaving waves of trees roll out in front of you like an endless ocean of color and a tsunami of smells, every tree a tall Q-tip of orange and red.  Hardwoods shed their leaves like a hurricane rain so thick that a sea of gold, orange, red and purple blankets everything, turning the scenery into a Norman Rockwell painting.  I rode through it all on two very different motorcycles. 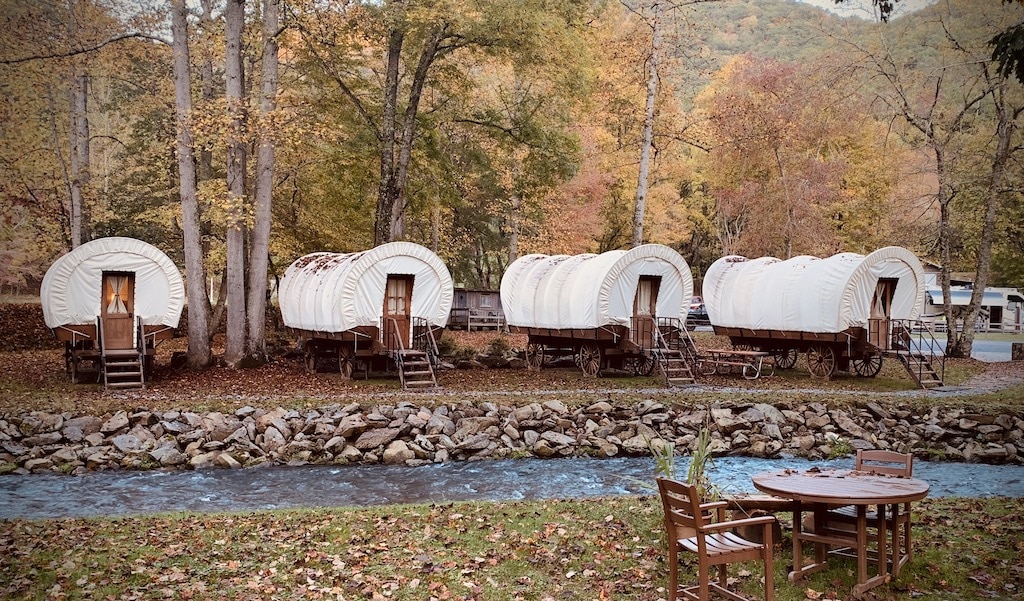 Conestoga Wagon accommodations at Iron Horse Motorcycle Lodge are deceiving.  They have electricity, heat and air conditioning.  Early pioneers never had it so good.

Our group of Road Dirt senior editor, chief cook and bottle washer Rob Brooks, his longtime friend Lyle Branton and Road Dirt’s tech guru Phil Gauthier left Iron Horse Motorcycle lodge in the middle of the Southern Appalachians.  Located just outside of Robbinsville, North Carolina it sits in some of the best motorcycle roads in the country.  The nearby Blue Ridge Parkway was our destination and as excited as I was to waltz on this famous road, I didn’t expect much of my ride. 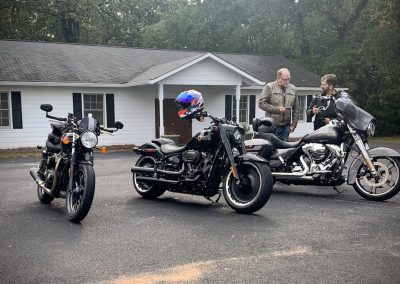 Phil lent me his 30th anniversary limited edition Harley-Davidson Fat Boy to ride.  The bike is a black and gold stunner but I am a sport bike rider with dirt bike roots and was not expecting much from the low and wide behemoth.

Here is where I admit to both of my readers that up until then, I had never even sat on a Harley.  As un-American as that is, I find faster, lighter and more capable bikes from the Land of the Rising Sun.  The first time I pulled out of Phil’s driveway on the Fat Boy, my feet missed the floorboards and hit pavement where I expected my rear set pegs to be.  Embarrassing.  Harleys are not sport bikes with rear sets and should not be treated as such.  That soon changed. 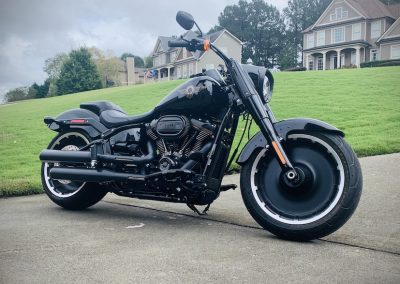 My first Harley-Davidson experience, a 30th anniversary limited edition Fat Boy.  Notice how clean it is and how intact the floorboards are?  Guess how long that lasted.

When we arrived at The Blue Ridge Parkway, it was love at first sight.

The Blue Ridge Parkway is 469 miles of motorcycle nirvana.  A paved heaven that took over 52 years to build, it meanders through the Appalachians like it has not a care in the world; a turn here, a tighter turn there, a tunnel just for fun and yet another scenic pullout with hilltop views of endless waves of fall trees continuing to a distant smoky horizon.  Fall beauty draped over the land in a carpet of color and rarely did the pavement stray from perfection.  Cool fall temperatures contrasted sunny blue skies as leaves wearing their best clothes fell constantly around us.  We rode from the highest point on the Parkway at 6,053 ft. to the terminus in Cherokee and there was never a straightway that allowed more than one upshift.  And through it all, there were the leaves.

Blue Ridge Parkway provided an infinite supply of beautiful leaves in a tree canopy so thick that they blocked the sun.  Falling everywhere they bounced off the motorcycle, ricocheted off my chest and slapped me in the face shield.  Phil’s Harley-Davidson Street Glide in front of me tossed leaves high into the air like a hydroplane stirring up a rooster tail of orange and red.  I was beginning to like the Appalachians.

As I listened to the song of the Appalachian landscape I asked the Harley if she wanted to dance.  She said yes.  And so it began.  Harley purists, please do not read what comes next; it will make you cringe. 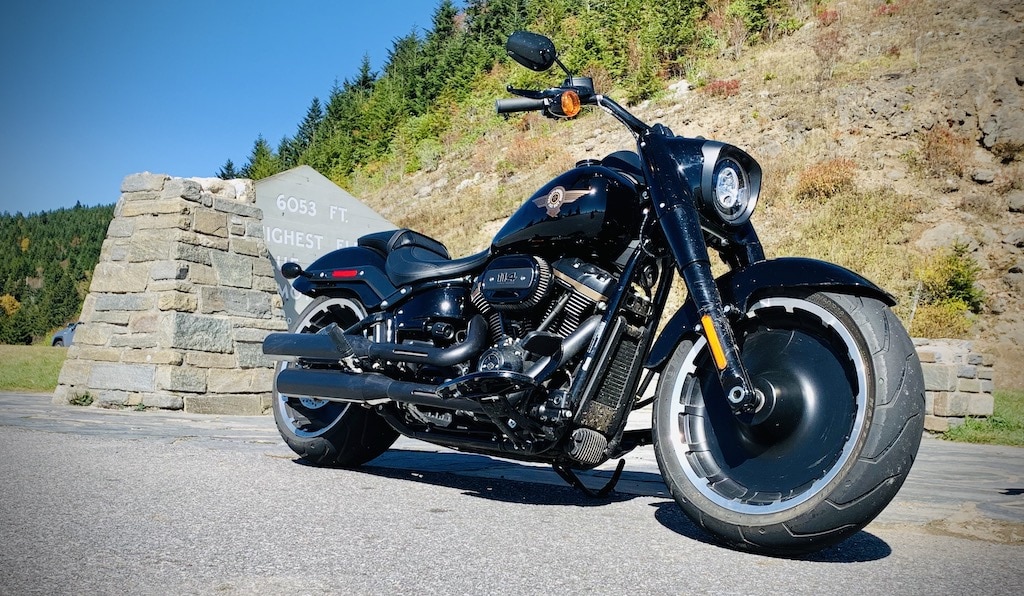 “Monica” is a stunner in black and gold, decorated with bugs and floorboards properly clearanced.  Locomotive sized solid aluminum wheels carry massive 240mm rubber in the rear and 180mm up front.

I clicked the 114 cubic inch V-twin into third, reached back with my toes and flipped down the passenger pegs.  Placing my feet there like rear set pegs and leaning forward on the tank, chest low, I looked like I was launching a dragster.  Aiming for my next braking point I pinned the throttle on the massive, velvety V-twin (how can a big V-twin be so smooth?) then squeezed the front brakes.  I braked past the turn-in point trailing brake pressure as I added lean angle then slid off the seat, got my torso low and off the bike and oh my goodness, did the Harley like it.  Floorboards scraped mercilessly which didn’t matter because my feet weren’t using them anyways, they just folded back up to the chassis.  More cornering clearance.  At the turn exit, I pinned the throttle and let the rear tire hook and drive.  We were dancing.

At the next gas stop, Phil asked me how I liked his Harley.

“The Blue Ridge Parkway is perfection,” I replied, “but I am in love with Monica.”

“I named her Monica,” I said, admiring the Harley’s low, wide beauty.

I explained our routine and apologized for “clearancing” Monica’s floorboards.  She is a  limited edition Fat Boy, one of only 2500 Harley-Davidson will ever make and I was treating her like a track weapon.  Sorry Phil.

What a sight we must have been.  Out of the sorely beautiful fall trees came a low, black locomotive of a motorcycle, her V-twin pinned, my chest low, feet on the passenger pegs, braking hard at the last moment then leaning off the bike and diving into a corner, floorboards scraping then accelerating away.  If my sport bike brethren in the Wild Rose Squad were here I could not keep up, but I would certainly shock the hell out of them.  Dancing though the “Appalachian Playground” was bliss and Monica was my lovely partner.

The next day we rose to a sight I never thought I would see in all of my motorcycling life: three bikes, nine wheels.  Today, we are riding Yamaha Nikens. 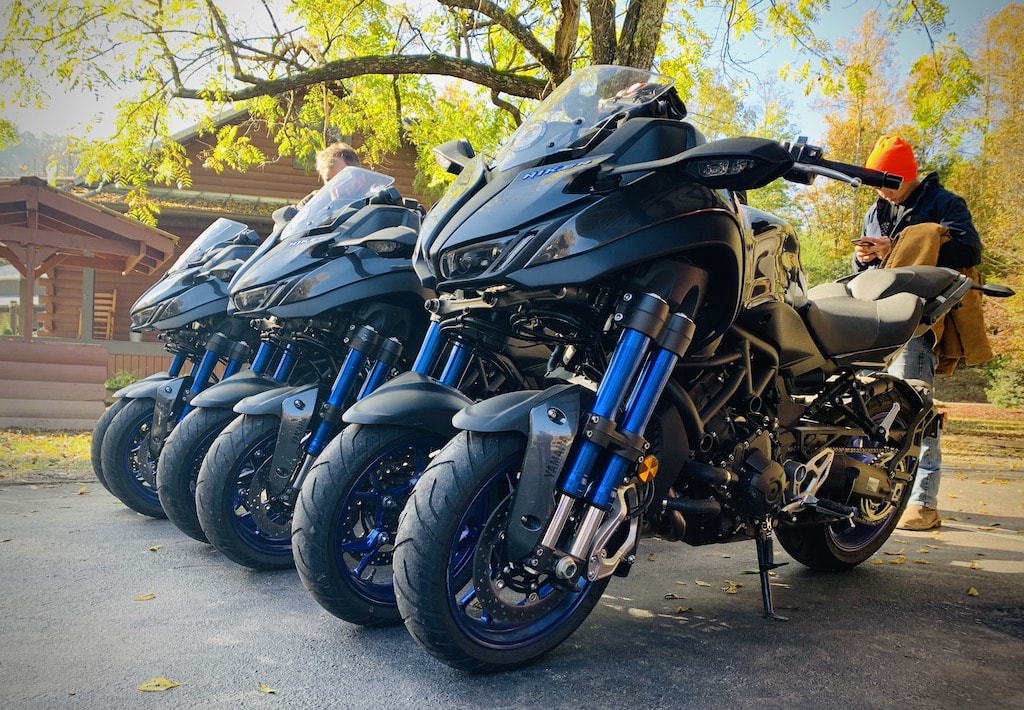 The wheel parade was responsible for more Instagram posts than I care to imagine.

Yamaha Nikens are three wheel orphans from a Transformer movie with menacing eyes, tall shoulders and four long legs that extend to a pair of articulating front wheels.  None of us had ever seen one, much less ridden one before, so of course we decided to immediately take them to the Tail of the Dragon. 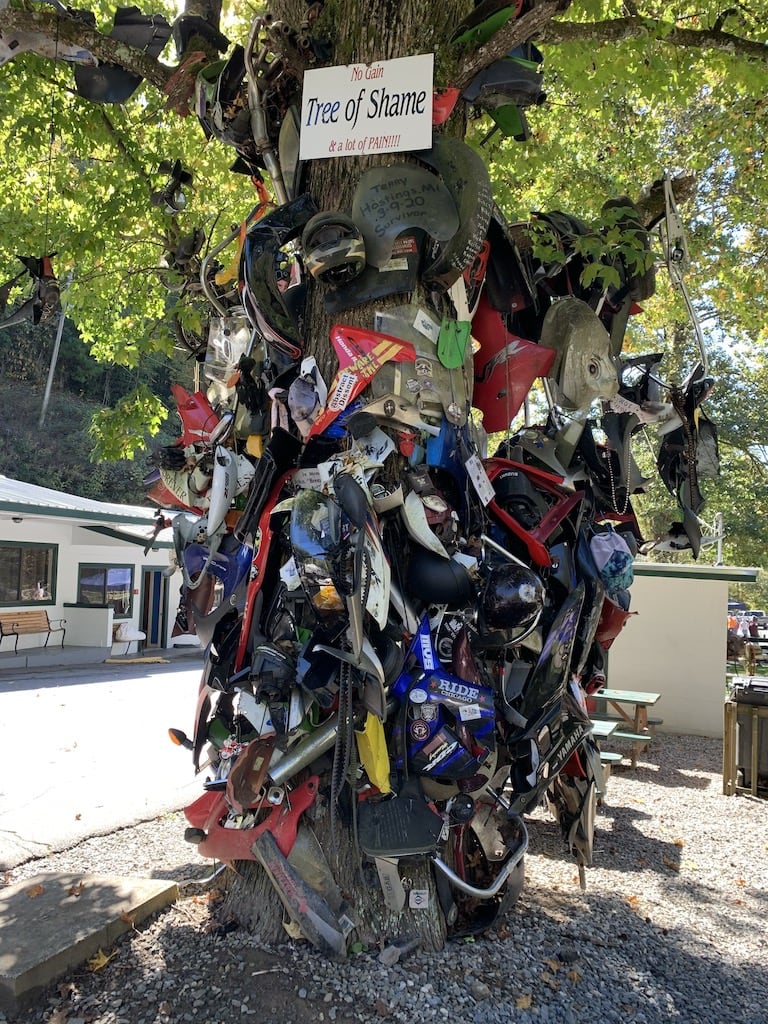 The Tail of the Dragon claims its victims.

The Tail of the Dragon is infamous in motorcycling and its stat line is well known- 318 curves in 11 miles.  Pavement on the Dragon was as fantastic as it was everywhere around the Appalachians, but with heavily banked corners.  Just as I was about to get into a rhythm with the Niken, the curves ended.  At only 11 miles it’s a good road, but too short and crowded to live up to the legend.  Overhyped, it is not in the same class as Beartooth Pass, Canada 31A, California Highway 1 from Leggett, North Cascades Pass or Lolo Pass.  Neighboring Cherohala Skyway is the real star. 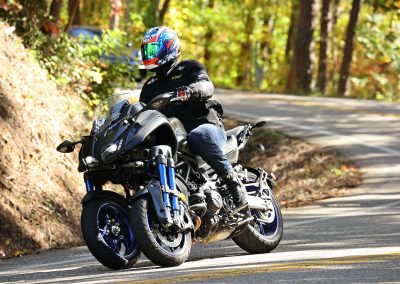 Traffic was too heavy to properly exercise the Niken on The Tail of the Dragon, but one more thing was checked off my motorcycle bucket list.  Photo by US129Photos.com

After riding The Dragon we rode south to Tellico Plains, Tennessee to pick up the Cherohala Skyway.  Crowds descend on The Blue Ridge Parkway and the Tail of the Dragon turning Cherohala Skyway and her 43 miles into empty perfection.

Cherohala has all of the Autumn splendor of the Appalachians in October combined with never ending fourth gear sweepers long enough you could read a book in them and have time leftover to check your fantasy football lineup.  As I tangoed though the unfolding country side I decided to ask the Niken if it wanted to dance.  It replied an emphatic yes.

I increased my pace on the Cherohala and found the leverage of the wide handlebar helped defeat the extra gyroscopic effect of two front wheels.  Its up-only quickshifter worked smoothly and backshifts on the smooth six speed transmission required only a brief touch on the clutch.  Power mode 1 is the most aggressive and I don’t know why anyone would select anything else because the 850cc triple hits the sweet spot between big-piston torque and top end revs.  As I increased pace I found myself putting unusual confidence in the front end.  With double the contact patches I did not worry about wet leaf piles, tar snakes or apex gravel, I just plowed ahead and let the front end carve.

Hustling on the willing Niken accompanied by the Cherohala in her fall best made me think two things: first, I died on a corner sometime yesterday and ended up in motorcycle heaven and second, I promised to myself that sometime, somewhere, at some point in this journey I will put the spurs to the Niken. 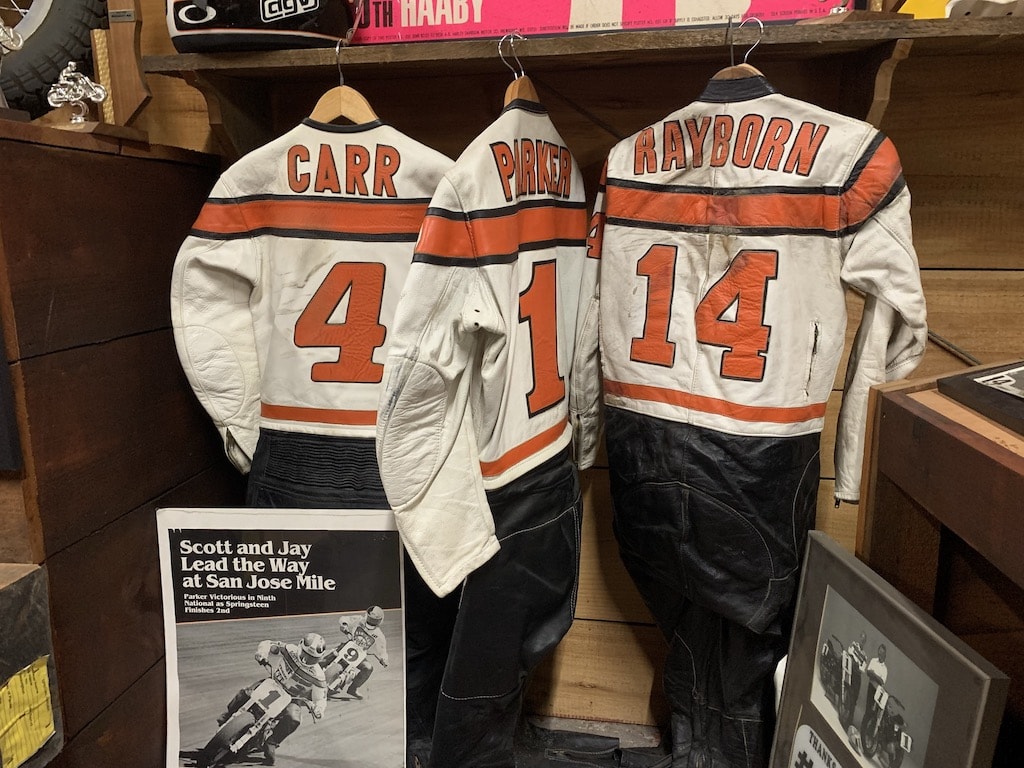 A brief stop at the Wheels Through Time museum in Maggie Valley walked us through American motorcycling history.

The next morning I had the choice of getting back on the Niken or renewing my love affair with Monica.  I chose the Niken.  I had a plan.

Traversing back to the Blue Ridge Parkway, we picked it up at it’s far southern end and it was predictably spectacular and typically crowded.  Without saying a thing to our group, I picked my spot and hatched my plan.   Backshifting twice, I dispatched the white SUV in front of me.

We played for a while, the Niken and I, in our Appalachian playground at speeds that would have put the Niken into impound and me in the backseat of a patrol car.  I pushed braking later, gassing harder and leaning on the front end more.  I asked questions of the Niken which it sometimes answered correctly and other times didn’t.  Three legged dance partners can only do so much.

But no matter because as I pushed the Niken though the landscape I was laughing out loud in my helmet, whooping, hollering and rediscovering why I started riding motorcycles in the first place.  Any bike that can do that is a bike worth owning.

As the Niken and I discoed around curves together the leaves fell around us like God’s brightly colored ticker tape parade, celebrating our arrival as if we were astronauts returning from the moon.  Descending on our hooligan act they were the spectators to our performance, an audience to our dance, cementing that place in time as one of the best motorcycling moments of my life.  Leaves can fall only once and what a glorious moment they chose. 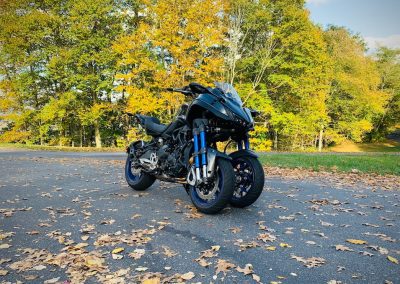 The next day we rode for home and I renewed my love affair with a fat Harley named Monica, my feet on her passenger pegs, chest low, her V-twin mumbling beneath her breath, sparks flying from what remained of the floorboard scrapers as leaves stirred up in our wake in dreamy fall splendor.  Monica and I were dancing again.

But that is how a land and a motorcycle burrow into your soul- you ask them to dance.

*A shout out to Cycle Gear for the REAX Poseidon Dry Bag we used on this trip!

*Be sure to check out our video review of the Niken, as well as our stay at Iron Horse Lodge, right here!